The Cambridge Companion to Constantinople 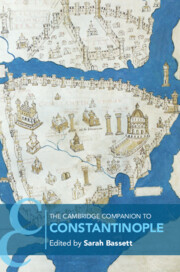 From its foundation in the fourth century, to its fall to the Ottoman Turks in the fifteenth, 'Constantinople' not only identified a geographical location, but also summoned an idea. On the one hand, there was the fact of Constantinople, the city of brick and mortar that rose to preeminence as the capital of the Roman Empire on a hilly peninsula jutting into the waters at the confluence of the Sea of Marmora, the Golden Horn, and the Bosporos. On the other hand, there was the city of the imagination, the Constantinople that conjured a vision of wealth and splendor unrivalled by any of the great medieval cities, east or west. This Companion explores Constantinople from Late Antiquity until the early modern period. Examining its urban infrastructure and the administrative, social, religious, and cultural institutions that gave the city life, it also considers visitors' encounters with both its urban reality and its place in imagination.