From Manhattan to Mainhattan: Architecture and Style as Transatlantic Dialogue, 1920-1970 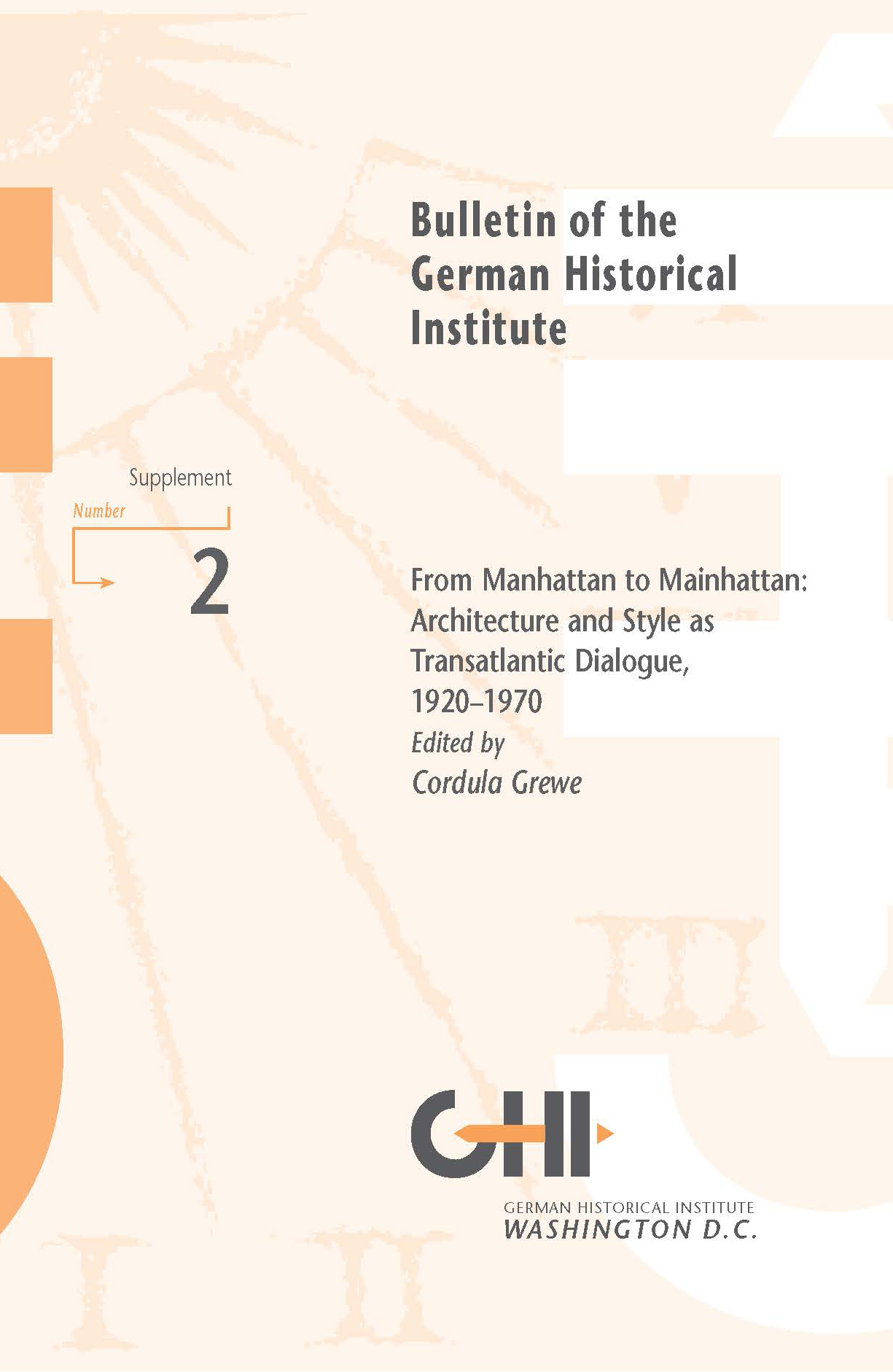 From Manhattan to Mainhattan: Architecture and Style as Transatlantic Dialogue, 1920–1970

Introduction: From Manhattan to Mainhattan. Reconsidering the Transatlantic Architectural Dialogue

A Cathedral of Work and New Social Life: The Contribution of Max Berg to the German Skyscraper Debate

Max Berg’s activity as Breslau’s chief architect. His first large-scale urban project was produced for the Gross-Berlin competition of 1910. Berg did not win the competition, but he would take the scheme he devised for Berlin’s urban development with him to Breslau. The primary project discussed by Störtkuhl and Ilkosz is Berg’s 1919 plan for the reorganization of Breslau and the skyscrapers his plan foresaw. Berg’s interest in the skyscraper was not marked by unreserved enthusiasm for American development. He promoted sensitive design of the skyline and the incorporation of high-rise construction into a general city plan.

Skyscrapers and Healthy Cities: Walter Gropius and Martin Wagner between Germany and America

Walter Gropius and Martin Wagner were architects and planners whose careers led them from Germany to the United States. Each was intensely involved in discussions of the potential for skyscrapers and mass-produced housing to reform the urban environment. In the 1930’s they both found posts at Harvard, where they co-authored a number of articles on the state of the contemporary city. They called for decentralization and large scale planning. Skyscrapers were definitively rejected. Pre-fabricated housing systems were to provided a remedy for America’s ailing cities. After World War II Gropius expressed an ambivalent attitude toward standardization. Martin Wagner, however, reiterated his call for radical standardization. The American experience softened the planning strategies of Gropius, while Wagner remained devoted to the radical ideas that originated in his Weimar years.

James-Chakraborty evaluates the reception of the work of Mies van der Rohe and Erich Mendelsohn in post-WWII America. Comparing their respective designs for Stuttgart department stores, James argues that Mendelsohn was more successful for having incorporated theatrical elements of American commercial architecture into his designs. Indeed, Mies’ design for this project was not realized. In post-WWII America, however, Mendelsohn’s notoriety would pale in comparison to Mies’. With his tenure at the Illinois Institute of Technology and his renowned Seagram building Mies made a lasting and highly public impression. Mendelsohn, however, worked primarily on suburban synagogues, building only one high-rise hospital in the US. He was no longer interested in urban spectacle—the connection to place and the enduring values of religion flavored his late work. Ultimately, James reads the varied reception of Mies’ and Mendelsohn’s work as an index of the diverse roles architecture has to play in distinct social contexts.

Buttlar traces the relationship between structure and surface in German high-rise construction from the early 1920’s to the late 1960’s. The “Germanized” variations on the form of the skyscraper solicited by the 1921 Friedrichstraße competition proved to have a lasting influence, yet they would not define German skyscraper design in the ensuing years. The Nazi interest in skyscrapers arose in the late 1930’s, but they adopted neither the modernist curtain wall, nor the expressionist articulation of the earlier German projects. They turned instead to the neoclassical tradition. This return to classical models was motivated by the desire to express tectonics and to underplay surface value. Buttlar traces this desire back to the interest in Greek temple form which occupied Gilly, Schinkel, and, above all, Leo von Klenze. For Klenze the essence of the Greek temple was to be found in its tectonic expression—its formal illustration of the forces acting within the structure. The reliance on tectonics as the key to architectural expression outlived the Nazi regime. Various architects who had been successful during the Third Reich continued to design skyscrapers with a marked emphasis on tectonics in Post-War West Germany.

Berlin’s Europa-Center (1963–65): Amerikanismus, Consumerism, and the Uses of the International Style

Sedlmaier discusses Berlin’s Europa-Center as a product of the post-World War II transatlantic architectural and economic dialogue. When the Europa-Center opened in 1965 many observers noted its international, if not American, flare. The architects, Helmut Hentrich and Hubert Petschnigg, had a long -standing interest in American architecture. Each of them had visited the US first hand and their office buildings were widely considered to have affinities with those of the American firm Skidmore, Owings, and Merill. Similar ties to America are to be found in the biographies of the advisory architect, Werner Düttmann and Egon Eiermann. This building could not have been built without the masterful planning of the key investor, Karl Heinz Pepper. His shrewd investment strategy capitalized on Berlin’s unique economic position. As the city received extra funding from West German authorities, he devised a way to pull investment to his development, effectively riding a wave of increased demand for consumer-oriented spaces. It is within this context of accelerated consumer culture on the American model that Sedlmaier locates the Europa-Center.

Müller discusses the extended process of planning a high-rise for the center of East Berlin. In the “socialist realist city,” high-rises were to symbolically take possession of the city’s most expensive land. From the start, the German Democratic Republic had planned a Moscow style high-rise for the site of the demolished Berliner Stadtschloß. The idea of a central administrative tower went through a series of permutations before its definitive demise. In 1959 Hermann Henselmann designed a central ensemble which featured a needle-shaped signal tower with a spherical Sputnik satellite perched on top. Although no high-rise governmental building would be constructed at the center of Berlin, Henselmann’s signal tower was revised and built as the Fernsehturm in 1965. East Germany could momentarily rest on its relative prosperity of the mid-1960’s, imagining that it might actually be ahead of the West in the architectural race.

From an “Alien, Hostile Phenomenon” to the “Poetry of the Future”: On the Bauhaus Reception in East Germany, 1945–70

Thöner traces the reception of the Bauhaus in East German architectural and design theory. In the early years of the Soviet Occupation Zone various attempts were made at founding design schools on the Bauhaus model and continuing Bauhaus inspired urban planning strategies. After the founding of the German Democratic Republic the so-called formalism debates erupted, which resulted in the official interpretation of the Bauhaus, and modern architecture in general, as cultural forms at odds with the imperatives of socialist realism. After the new economic policies of 1961 the inter-war avant-garde attracted renewed interest. 1963 saw the first publication on the Bauhaus in the GDR. In the 1980’s the cultural philosopher Lothar Kühne would again bring the Bauhaus into contemporary design discourse through his theoretical investigation of functionalism. For all of the interest devoted to the Bauhaus in the GDR, the Bauhaus Dessau would only be reopened in 1987.

Krieger discusses the post-WWII Jerry Cotton detective films as symptomatic of the convergence of architectural styles between West Germany and the United States. While all of the films ostensibly take place in Manhattan, most were in fact filmed in Hamburg. Filler scenes of Manhattan streets augment the glassy urban imagery of Hamburg’s post-WWII high-rise development. These films were instrumental in shaping West German aesthetic consciousness and powerfully presented the image of the skyscraper as an icon of modern life. The internationalization of skyscraper design and decontextualizing camera techniques allowed the directors to present Hamburg as Manhattan. The image of the city seems to have become generic and interchangeable in the post-WWII world. This case study illustrates the need to re-think chorography, the ancient art of spatial description, in terms of the modern urban condition.

The Bauhaus, Transatlantic Relations, and the Historians

Berghahn provides a broad view of the migration of people and ideas back and forth across the Atlantic in the twentieth century. Berghahn analyzes the process of cultural exchange which underpins the arguments of the other contributors. Neither American nor Western European culture could remain unchanged in an era in which educational ideals, technological know how, and patterns of consumption circulated at an international scale. The American reception of the social and aesthetic ideals of the Bauhaus illuminates the process of transatlantic exchange and transformation. As an object of historical study, the Bauhaus also provides unique opportunities to reunite various historical methodologies which have been institutionally stratified throughout the course of the century.

The Representation of “Tall Buildings” in Austrian and German Commercial Art, 1920–40

Christian Maryška discusses the infiltration of the image of the skyscraper into German and Austrian graphic design. Designers used the skyscraper to lend the look of modernity to the products in their advertisements. Most of these images had a thoroughly positive content—only film posters such as those for Lang’s Metropolis would allude to urbanity’s diabolical character. Ironically, the frequency of skyscrapers in advertisements was highest precisely in those years when none were under construction. Nevertheless, the skyscraper figured prominently in the sphere of town promotion, lending a powerful image of modernity to Germany’s commercial centers.